I think it’s interesting that there isn’t currently a way to manipulate your deployment flips, though if it was as rare as Ill Omens it could really be overpowered. What can I do when I constantly get forced to deploy first?

First off, I think winning the deployment flip deserves more thought than simply letting your opponent deploy first so you can see their models and where they’re going. Sure that information is incredibly valuable and I don’t want to understate that, but before going that route look at your table and its terrain. Think of your game plan and how it fits the strategy and your schemes, where do you want to be in 3 turns? Potentially more important, where do you want your opponent to be?

Lets forget about terrain and such for a just a moment and talk about how you can dictate your opponent’s deployment should you deploy first. You know that your opponent is going to react to where your beaters are, where your scheme runners are, etc. And generally based on their crew selection and the game objectives you can probably discern a little bit of what they might do. If you think they’re going to want to kill your beater rather than ignore it set a trap! I could go on but I’ll just plug a previous article here, use the concepts of Pressure to force your opponent’s hand and make them play your game.

Even the most balanced maps have some area that can be exploited a little, so if you find yourself frustrated having to deploy first – don’t be! Take a deep breath and think about what side is going to benefit you the most, and be the biggest detriment to your opponent.

Use deploying first as a way to set traps, or to dictate the pace of the game by limiting your opponent’s options. Deploying a big power piece will most likely give you control of that area unless your opponent plans to go head to head with it. You could feint schemes at deployment, if Inspection is in the pool and you place scheme runners on the flanks? You can be sure they’re assuming you’re taking Inspection. Use these things to your advantage! 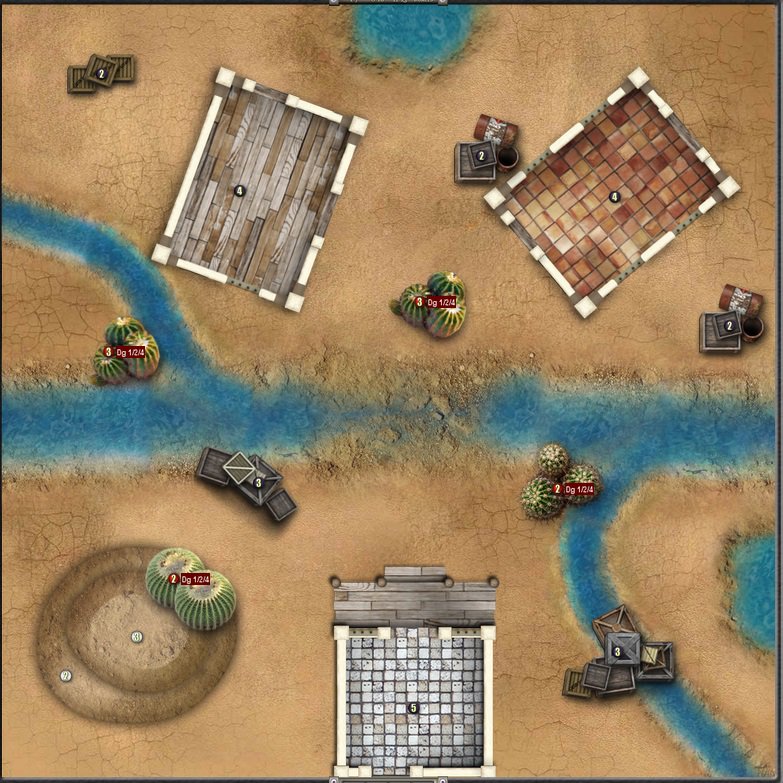 Top Half: This side would be fantastic if you’re running against a shooty crew, lots of hard cover for you to hide behind while you’re moving your models up. Even better if you have some range of your own. If the strategy was head hunter with some schemes that aren’t board location dependent you could theoretically hold up in those buildings and lay down the law – a good old fashioned Western shootout. Whats better is that if your opponent’s crew is melee in this scenario they have to deal with Severe terrain. You could even do claim jump without crossing the river! Also your opponent wouldn’t have a ton of cover when they were coming at you, its pretty spotty so you’ll probably be able to do some damage.

Left Side: Lots of severe terrain, this could cut your forces and cause you serious issues. Not a ton of cover, but you would get vantage point from that hill in the bottom, not sure if worth. The building in the top side would also be of use, but probably only to half your list, and it could very well eat AP to walk around slowing down your game plan.

Bottom Side: Vantage point from the hill, lots of cover during deployment so if your opponent has Deploy from the Shadows you’ll probably be fine here. Cover revolves around the center 6″ circle, you could effectively create a field of fire obliterating opponent models in Turf War/Extraction. The river to the right corner limits your deployment area a little.

Right Side: Even more severe terrain than the left, but you have a ton of cover from the get go. The cover on this side is closer to the board edge than that of the left so you can probably start most of your crew in cover. Facing snipers or if you have unimpeded models this side could be strong.

With these pros and cons in mind you can start thinking about whether you want your opponent to have first deployment or not. If they take the strong side of the map then they may not necessarily care where you deploy. If it was corner deployment in the above map and you let your opponent deploy first so you could see their models, and they pick bottom right? You may very well just have shot yourself in the foot. Now you have to deal with severe terrain below you, a large building that will mess up your movement greatly, the easiest path to take would be skirting above the top edge wasting your AP.

This is a text widget. The Text Widget allows you to add text or HTML to your sidebar. You can use a text widget to display text, links, images, HTML, or a combination of these. Edit them in the Widget section of the Customizer.