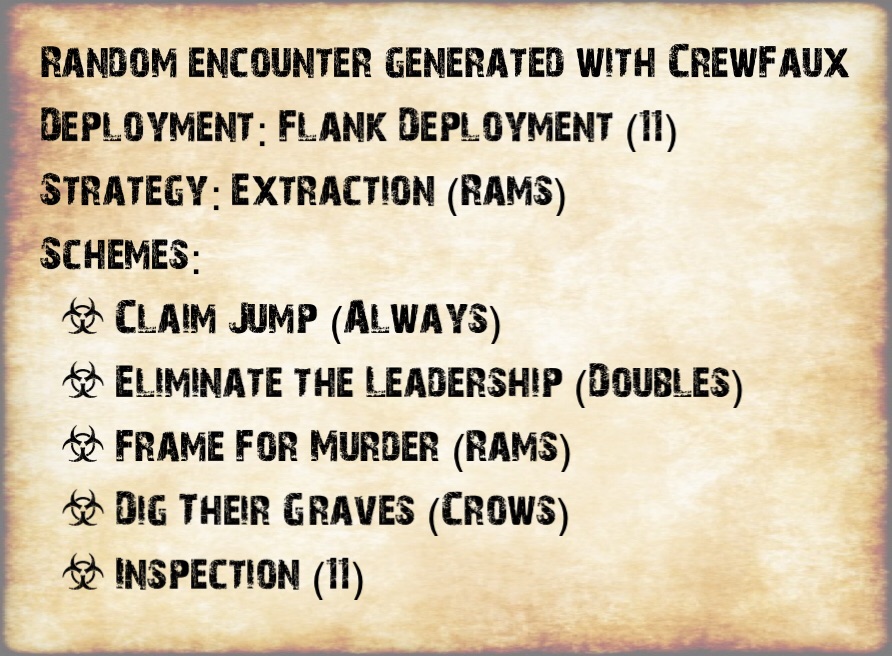 Alright team, lets get to it! I’m literally opening Crewfaux now and getting us an encounter to talk about!

Flank deployment with Extraction is already going to make this a very up close and personal game. With a control the center Strategy, Flank deployment means that many models can make it to the center with 1 walk action should they choose to do so.

Throwing in Frame for Murder, Eliminate the Leadership, and Dig Their Graves, makes this truly a killing game. You could try to sneak out a victory running Inspection and Claim, but I would very seriously doubt that would hold much success.

Frame with Eliminate the Leadership also adds an extra layer of mind games, charge your crazy face beater at their Leader and they won’t know which scheme you have!

As with any Eliminate the Leadership pool you’re going to want to stick to a tough master to deter your opponent from easy points. Another alternative is to bait it with a weak master and hide them in a safe place, which could be difficult with Flank deployment. I would pick Ironsides for this game.

I typically don’t enjoy taking Frame for Murder since it puts your 3 VPs in your opponent’s hands, and you’ll most likely only get 2 if anything. If your opponent is good at killing with conditions this scheme is shot as well. However, because of how killy this whole pool is it seems like a safer bet to take Frame here. Most models will probably die in this tightly deployed game.

Dig Their Graves I love here, you could turn 1 setup a scheme marker in the Extraction bubble that would most likely be in range for a turn 2 kill and VP. You can even play a little defensive with Dig here by forcing your opponent to run at you if they want to deny you the strategy, and killing them by your markers.

Inspection could be difficult in this pool, its so easily denied in general that I would shy away from it. If you’re getting inspection chances are you’re not matching the model count for Extraction, which is fine and all if you plan for it, but your opponent could move it and deny you strategy points down the road.

Claim Jump would be doable, but you’d really have to watch your scheme marker placement if you took Dig Their Graves. More than likely your Dig markers will be within 2″ of the centerline, so Claim Jump would just steal em all away and you’re stuck having to replace them every turn for Claim and Dig which would eat your AP pretty quickly.

I would take a brawly beefy list, take Dig Their Graves, depending on my opponent’s master, Eliminate the Leadership, or Frame for Murder if I didn’t think I could kill their master.

Take and  hold the center with a strong core of beaters and tanks, place Dig Their Graves markers where my opponent won’t be able to avoid them, and try to take out their master when they come in to play. If they have a master that would stay back or just not die, I would Frame a front line threat model and threaten their master or beatstick henchman into killing it. Inspection and Claim Jump would not fit my game plan in this one more than likely, seems like they’d only make life more difficult.

This is a text widget. The Text Widget allows you to add text or HTML to your sidebar. You can use a text widget to display text, links, images, HTML, or a combination of these. Edit them in the Widget section of the Customizer.